Smartphones have become important drivers of business growth all over the world. As such, there has been a tremendous increase in the use of smartphones. However, Apple and Samsung smartphone brands have been in an intense struggle in the market. Their competition has provided many similarities in their products, although there are still stark differences. This competition however has made business owners wonder which is best suited for small businesses. Even though it is not possible to say outright which is and which is not. Samsung runs on the Android Operating System while iPhone runs on iOS. Here is a breakdown of the differences so that you can make a well-informed decision:

One major factor that influences people in choosing either Samsung or iPhone is because of their prior usage of other products in the brand’s ecosystem. For instance, someone who has been using iCloud and iTunes will go for an Apple device, while someone who uses Gmail, Google Calendar, etc, is likely to choose an Android device. Also, what you will be using your smartphone for determines the brand of phone you will go for. If your work requires you to get customizable devices that allow you to multitask, you would go for a Samsung device and PC. You might want to read about Samsung Galaxy A80 to know if it meets your business needs. If you are a video editor and your work requires you get a high-budget iMac, you would go for an iPhone.

This is another factor that determines which brand of smartphone you go for. Samsun runs on Android that accounts for 87% shares of the global market while iPhone is developed by Apple that controls the remaining 13%. As a business owner, you will find that most of your customers use an Android device. Even though this is not a major factor, nevertheless it influences business owners. 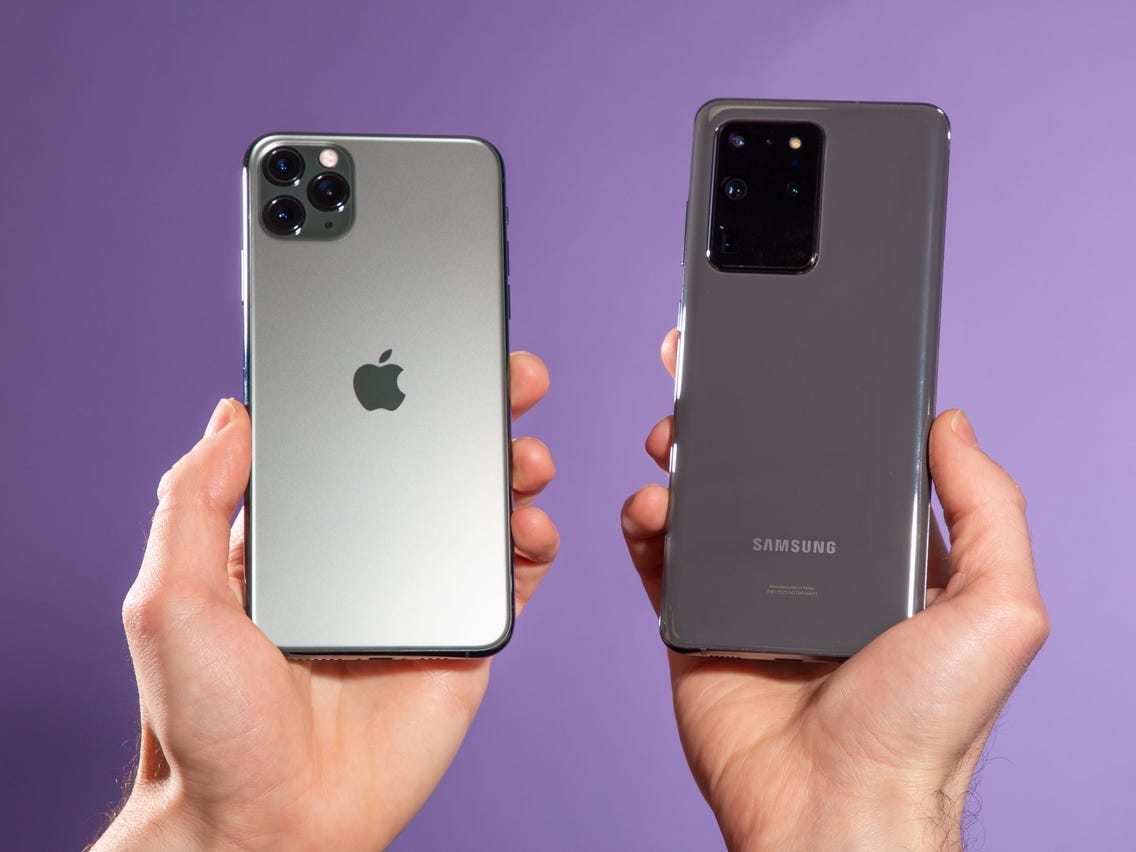 The look of the phone

Samsung and iPhones both have very sleek looking phones. However, functionality and sleekness are now being combined in today’s phones. Most smartphones now have larger high-definition screens. Now, small smartphones have been pushed to the background. Also, there have been advancements in the batteries, so phones now last a whole day and beyond. With these enormous advancements, Android phones effectively compete with iPhones.

One advantage that Samsung and other Android users enjoy is their phone’s capabilities to expand storage. Despite the fact that some devices have over 64GB, Android smartphones still allow users to insert SD cards into their phones. If your business demands that you store a lot on your phone, you may have to go for an Android device. However, iPhones come with a lot of storage capacity too.

You need strong security for your work phone. It is unclear which provides better security between Android and Apple but here are their differences. iPhone users have access to new security updates after they have been released. The brand meticulously screens every app in their app store, so users are protected from downloading malicious apps. Apple has a tighter control on their ecosystem than Android. Hence, Samsung users have to wait for some time before the latest version is launched and available for them to upgrade to. Besides, there are so many producers of Android devices in the market that you can get confused about which to go for. However, both companies have worked towards improving their security details. Users now have to grant apps permission before the apps can access their phone details. There is also the fingerprint reader which iPhone and Android have both adopted.

It used to be Apple company that only has a robust selection of apps; users can get their hands on almost any app and use it. However, Google has improved on its Play Store too. Now, almost all major applications are available on each platform. However, Apple users still get to be the first to use the apps that come out. Apple platform is not available to every phone manufacturer, while Android’s is. As such, publishing an app on the platform takes quite some time considering the technical specifications and screen resolutions. Unfortunately, badly developed apps exist on Google Play Store.

What is the essence of a phone that is not user-friendly? However, it will delight you to know that both phone brands are user-friendly. To a large extent, iPhone and Samsung phones are on a par in this area. But there is a rule of thumb: if you want to customize your experience, you should opt for a Samsung device. If you want a consistently easier experience, you should opt for iPhone. The one you choose ultimately boils down to your preferences.